Looking for stocks with explosive growth potential? The biotech industry is an excellent place to start. Clinical trial victories and regulatory approvals can send shares of a biotech soaring, especially one with a relatively small stock market capitalization.

Of course, these companies also have their risks, so picking the right drugmaker is key to making market-shattering gains in the long run. Let’s look closer at one biotech whose shares have been hammered over the past few months, Axsome Therapeutics (NASDAQ:AXSM), and consider why this company still has some serious potential.

A series of setbacks

Axsome Therapeutics has encountered a couple of regulatory obstacles of late. On July 13, the company announced that the U.S. Food and Drug Administration (FDA) had decided to rescind the breakthrough designation for AXS-12, a potential treatment for catalepsy (loss of muscle control) in narcolepsy patients. A breakthrough designation helps speed up the review process for drugs intended to treat a severe condition. The FDA’s decision came after it approved a competing medicine for catalepsy.

Then the review of Axsome Therapeutics’ application for AXS-05 hit a speed bump. AXS-05 is a potential treatment for major depressive disorder. The FDA had initially set a date for completing its review — known as the PDUFA goal date — of Aug. 22.

But because of deficiencies in the company’s application, regulators were unable to complete the review of the drug by this date. The good news is that the FDA did not request additional information from Axsome. The bad news is that we still don’t know when the agency will complete its review of the application and what its outcome will be. 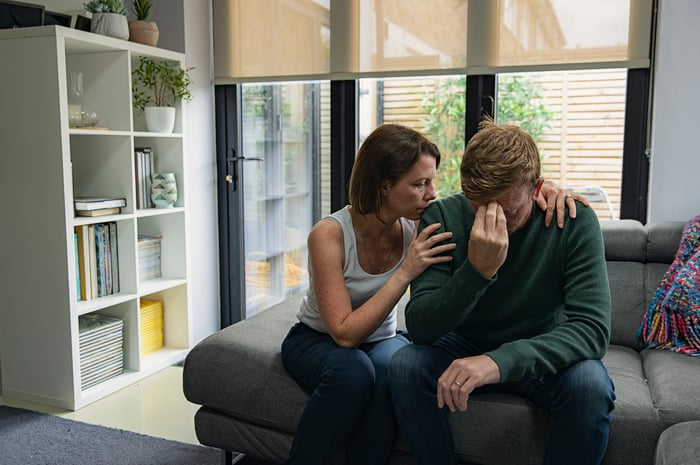 Why Axsome Therapeutics’ shares could soar

Despite these issues, Axsome could be a great long-term bet. Let’s look at the potential that AXS-05 offers. Depression is a serious issue that affects millions of people, and it has been exacerbated by the pandemic. Before the outbreak, 22 million people in the U.S. showed symptoms of depression. That number has almost quadrupled to 80 million.

There are certainly existing ways to manage this illness, but AXS-05 could be more effective. The drug significantly reduced symptoms of depression in a phase 3 clinical trial, and the FDA granted it “priority review” in this indication. The agency reserves the “priority review” designation for drugs that would be an improvement over current therapy options for an illness.

Axsome Therapeutics expects peak sales of between $1 billion and $3 billion in the U.S. for AXS-05 in this indication were it to be approved. The drug is also being investigated as a potential treatment for Alzheimer’s disease agitation (aggressive and erratic behavior), an indication that could bring the company $3 billion in sales.

True, the current regulatory issues surrounding this drug render its future uncertain, but Axsome isn’t a one-trick pony. The company has several other promising pipeline programs. There is AXS-07, an investigational therapy for migraines. Axsome recently announced that the FDA had accepted its application for this drug and set a PDUFA goal date of April 30, 2022. Peak sales for this medicine could be between $500 million and $1 billion, according to the company.

Axsome’s potential treatment for narcolepsy, AXS-12, with peak annual sales of $1 billion, also needs to be factored into the company’s outlook. While the proposed drug lost its “breakthrough” designation, it remains under FDA consideration.

With Axsome’s market capitalization standing at $1.2 billion, investors appear to have little faith the company can generate the kind of sales it predicts from its programs — and they could be right. There are certainly regulatory risks to consider.

On the positive side, Axsome had a cash and equivalents balance of $141.2 million. That, combined with capital remaining from a $225 million term-loan facility it secured in September 2020, should be enough to fund operations until at least 2024, according to management.

Given the biotech company’s current valuation and potential pipeline, it could provide explosive gains for investors who get in at these levels. However, be advised: There will be lots of volatility along the way. Invest accordingly.

Entertainment festival
We use cookies on our website to give you the most relevant experience by remembering your preferences and repeat visits. By clicking “Accept All”, you consent to the use of ALL the cookies. However, you may visit "Cookie Settings" to provide a controlled consent.
Cookie SettingsAccept All
Manage consent